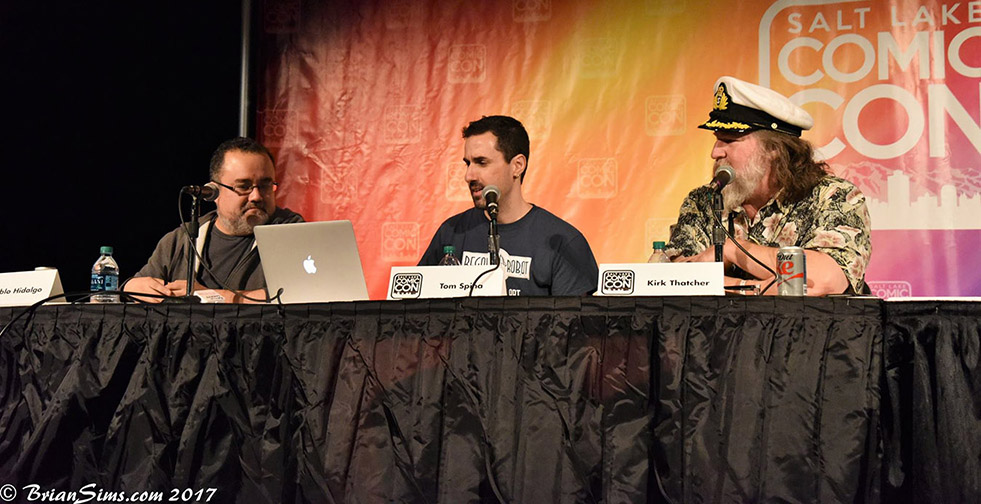 Regal Robot set up our own “Mandalorian Outpost” at Salt Lake Comic Con 2017 which featured all of the items from our line of Star Wars™ Mandalorian Skull creations!  Inspired by Boba Fett’s iconic armor and the famed skull symbol upon it, fans got a first hand and up-close look at the layers of detail and high quality hand painting on each of our many sculpture products.

Tom was also once again invited as a guest of the massive Salt Lake City show, where he was a part of five packed-house panels.

This year’s show featured twice the cantina!  Presented by Tom, along with old friend and Lucasfilm creative executive, Pablo Hidalgo, the pair hosted two in-depth, packed house panels about the making of the Star Wars Cantina scene. Fans got to enjoy rare and never before seen photos and hear stories from the crew that created the famous scene.

For the first time in the USA, the pair became a trio, presenting a similar panel with famed FX artist, writer,director and “Punk on the bus” from Star Trek IV, Kirk Thatcher!  Based on the monsters in Jabba’s Palace, this all-new panel featured a glimpse at a never-before-aired “Revenge of the Jedi” branded creature making featurette. Fans (and the hosts) laughed along as Kirk entertained them with his stories from 1983 when he was a member of the creature crew, behind the scenes on Star Wars, Return of the Jedi!

Tom also took part in wonderful panels about the 50th anniversary of the Pirates of the Caribbean ride in Disneyland, and an incredible look into the history of horror and special FX makeup with featured guest and special effects legend, Steve Johnson!

It was an incredibly exciting show and you’ll find some of our photos from the event below! We were thrilled to meet so many old fans and friends, and make some new ones as well!  For more pics, be sure to follow us on the Regal Robot Facebook and Regal Robot Instagram accounts!

If you were one of the many fans who stopped by to say, “hi!” at our booth, please be sure to post your pics from the show and let us know by tagging us at @RegalRobot on Twitter, Facebook or Instagram.