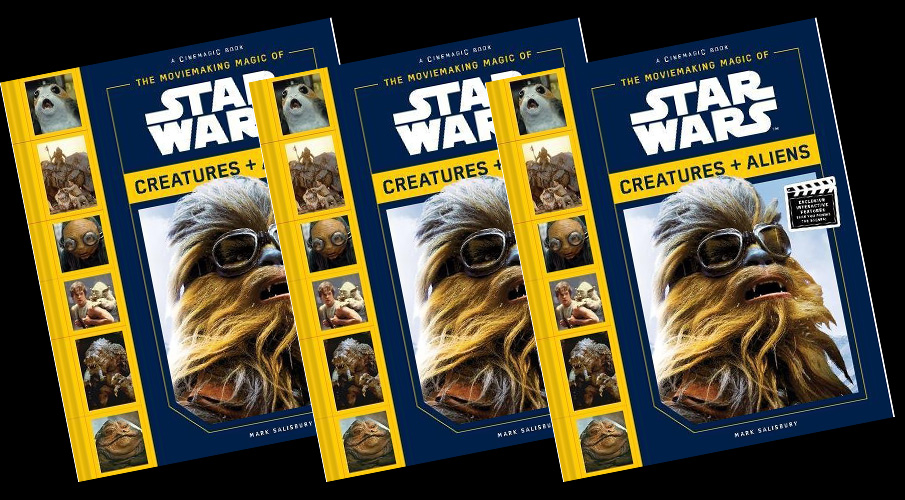 Now available for order is Mark Salsbury’s great new Star Wars creature book, The Moviemaking Magic of Star Wars: Creatures & Aliens. Our company founder, Tom Spina, known for his creation of Star Wars aliens for commercials and in-depth behind the scenes alien panels at Star Wars Celebration, was a researcher and technical consultant, putting to use his years of interaction with some of the movie creature crew who’ve inspired him, and his deep knowledge of their monstrous creations!  Look behind the scenes and learn about how some of your favorite characters were brought to the screen with this wonderful new book!

From the official description: “Go behind-the-scenes of the biggest movie franchise of all time in this immersive and interactive book to see how favorite characters—Chewbacca, Yoda, Jabba and more—were created from concept to screen. This collectible book includes 20 special interactive elements, including six-page booklets, accordion folds, and flaps that reveal the magic behind the movie with concept sketches, molds, digital imagery and more! Includes creatures and aliens from all 10 Star Wars films from A New Hope to Solo: A Star Wars Story”

About the author: Mark Salisbury is a contributing writer for Premiere magazine. He edited the book Burton on Burton (Faber & Faber) and is the author of Behind the Mask: The Secrets of Hollywood’s Monster Makers, among other books.

IF YOU LOVE THESE CHARACTERS AS WE DO
USE THIS LINK TO ORDER YOUR COPY TODAY!

Below are some looks inside the book courtesy of our friends at the Star Wars Show who covered it on a recent episode, to see more of this book (and so much more!) watch the whole episode here!