Hey all, Tom here… I’m excited to share one of the coolest things we’ve been asked to create! Chris Ropko is a collector who has both picked up some of our standard collectibles and decor, and even commissioned us to create an incredible set of Cantina Themed Furniture and Decor for his home.

For this custom project, we got to create a life-sized bust based on rare Bib Fortuna™ concept art. This was an absolute dream come true for our studio. The iconic artist who created this artwork has long been an inspiration for me, and his influence permeates the look of our favorite films, from the ships and locations right down to the characters. To be asked to interpret one of his creature designs was an amazing challenge and one we leapt to tackle!

It was important to me that this felt like it could be off in the background somewhere in Jabba™’s Palace in the film. That what we created felt not just like the inspiration sketch, but like something that could’ve been made at the time of the film and used on set. Working with Chris on this commissioned art was an absolute joy and he sent us this in-depth and extremely kind review of the experience…

“Tom Spina and his immensely talented team at Regal Robot created, on my behalf, perhaps one of the coolest pieces of Star Wars™ art that exists!

The idea for this project popped into my head one day while I was enjoying the wonderful illustrations in the absolute must-have Star Wars Art book published in 2016.  Bib Fortuna™ has always been one of those classic, mysterious Star Wars characters who had quirky and commanding design, but not a lot of backstory to inform the audience (a la many of the Cantina scene folks).  When I saw all of the different conceptual iterations sketched out, it really made the character that much more interesting for me, but the one drawing that hooked me was a color version of a gnarled, alternate universe Dickensian looking dude.  It immediately stuck with me.

When Regal Robot announced their Custom Character Studio, I thought that this would be a really unique drawing to bring to life.  My biggest concern was the lack of source material – there is only one concept drawing of the character, as depicted, that exists.  I reached out to Tom and talked through the idea with him and he was onboard, no doubt. 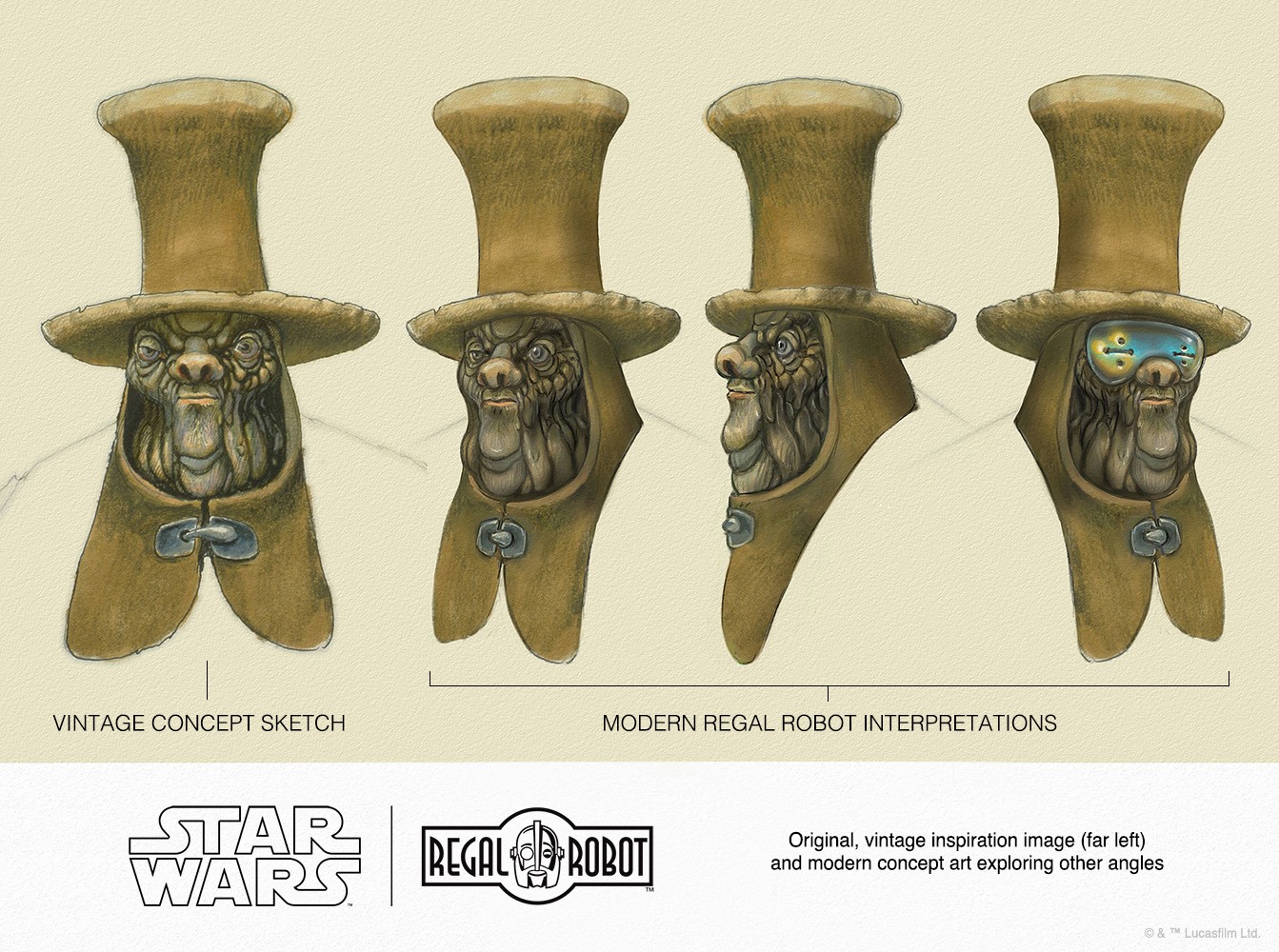 An interim step that Tom took was reaching out to Paul Bateman, a concept artist, former colleague, and friend of the original artist who created the sketch.  Tom asked Paul to help him conceptualize the original drawing from different angles to try and give the character more depth – the end result was such an incredible interpretation of the original work; it was mind-blowing to see.

Just think about it for moment: in most productions, the concept drawings are used to guide the prop creators and designers until a final form is settled on, which becomes the version that is consumed publicly.  Regal Robot was asked to do the complete opposite – create a three-dimensional product that is faithful to a two-dimensional drawing. We spent a lot of time upfront discussing very minute details of how the final fit and finish should look, but his process to get there was actually quite simple – get a big block of clay and start sculpting until it looks right.

I know Tom personally spent a ton of hours working through this piece, and it was this time spent that gave him a tremendous perspective in recommending certain tweaks to the expression and color tones of the skin, hat and cowl, which all turned out better than I could have imagined. What is so impressive about this is just how true to the concept drawing the final piece is, with a few minor touches that really make the sculpt life-like.

My absolute favorite aspect about the piece is that Tom made sure to keep the broader Star Wars prop making universe in mind so that, while detailed, it would not be something so over-the-top that it could not be replicated in physical form for an actor to wear as a mask or be done up as make-up; said differently, its tangible in a real world setting and would not require any CGI, much like the characters/costumes in the original trilogy.

In addition, the team at Regal Robot completed the bust with an awesome pedestal table that acts as an homage to the original concept drawings of Jabba™’s palace on Tatooine™ by the same artist, complete with sandstone effects and weathering – it really ties everything together. 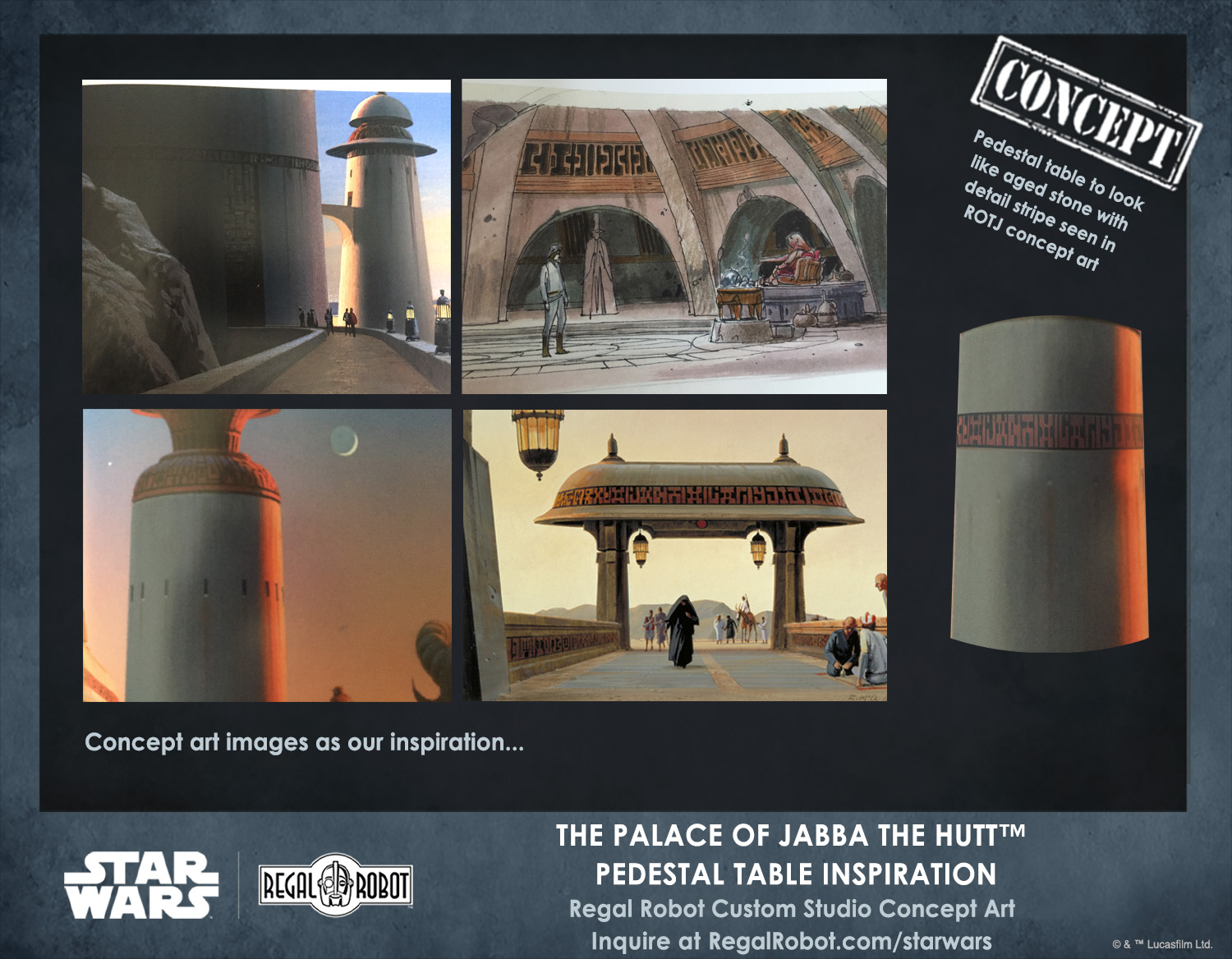 I am so thrilled with the final piece!  It has been a fun conversation starter when we have family and friends over at our house – it currently flanks the fireplace in our den along with the Peter Mayhew Tribute Chewbacca™ bust, Docking Bay 94 Plaque and Snaggletooth-inspired plaque that Tom and his team nailed.  The reason I know they nailed these pieces is because my wife suggested I put them there!  I didn’t even have to ask!!! 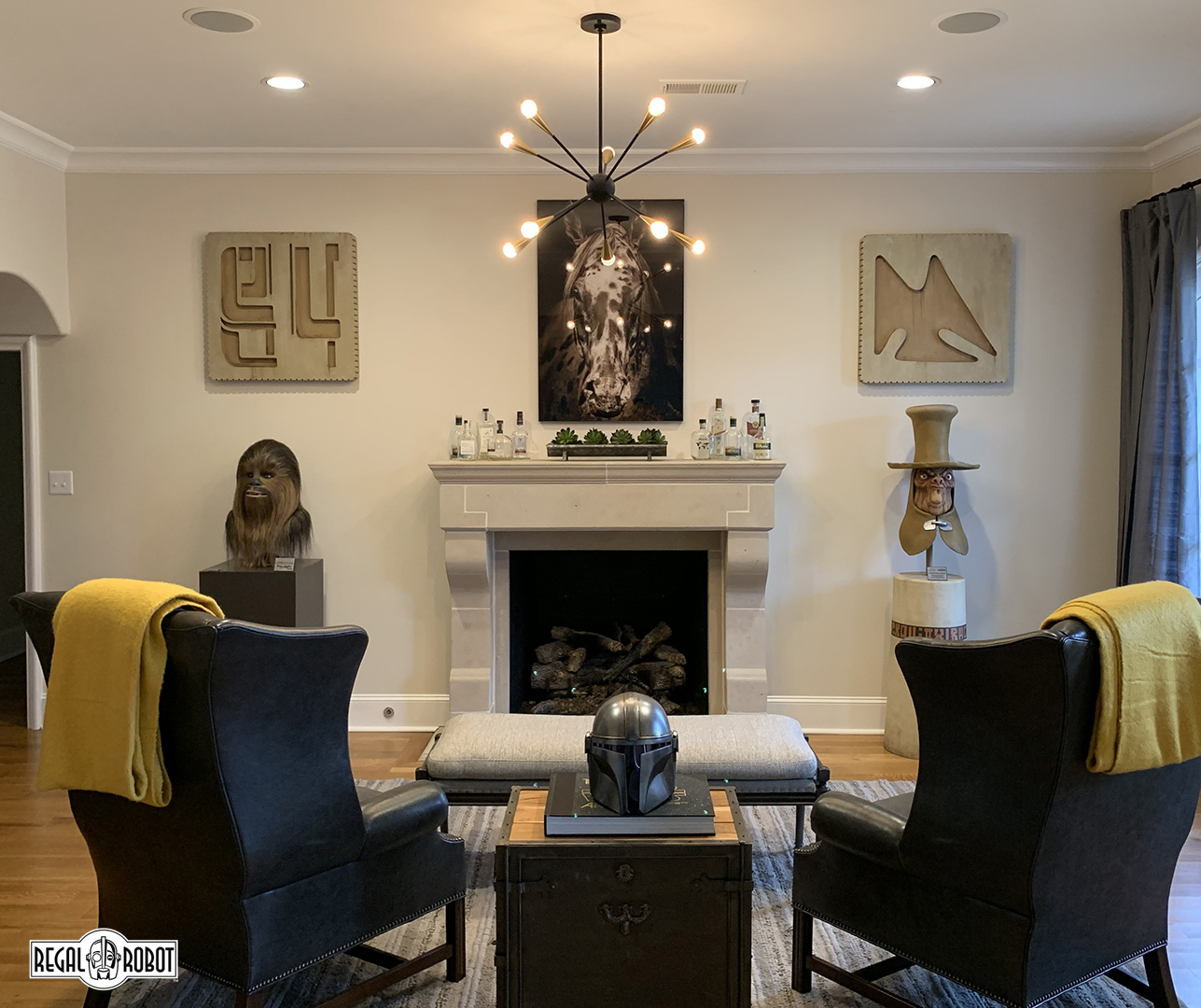 The folks at Regal Robot are so incredibly gifted and talented, it is still amazing to me how accessible they are.  There is something for everyone – they have the expertise and resources to make magic happen.  THANK YOU for creating the pinnacle of my collection!”

Thanks so much for sharing your story with us Chris and for such an exciting and unique commission! Folks reading, please be sure to check out the complete LIFE-SIZED CONCEPT BIB FORTUNA™ BUST PAGE for even more info and images!

You can use the form below to request your own custom Star Wars creation!

Lucasfilm and Regal Robot have teamed up to offer custom, special order and even one-of-a-kind official Star Wars furniture, art & decor. We can work with you to bring to life creations you’ve always dreamed of for your home, fan cave, or workspace, or create unique versions of our products, better suited to your needs, style or space.

Due to the time involved in making custom creations, we can only take a limited number of these projects each year.  Submit your custom request by filling out the form below to begin the conversation and learn what we can make for you!

your custom request by filling out the form below to begin the conversation and learn what we can make for you!