“Put Captain Solo in the cargo hold.” Who watches this scene from Star Wars: The Empire Strikes Back and immediately thinks, “You know what Han in carbonite would be perfect for? A desk!” The answer: the Regal Robot team. If you’re a Star Wars™ fan, you’ve probably seen our Han Solo in Carbonite desk floating around the internet. One fan in particular saw this design and knew that he needed it for his home, along with a few special modifications. You can see more images and details on our Custom Han Solo in Carbonite Project Page, but let’s hear about this collaborative custom furniture project from the customer himself…

Tell us a little bit about yourself. Name, where you’re from, and how you came across Regal Robot.

Hi, I’m Phil Alfano and I am from Topeka, Kansas, but now live in Boise, Idaho. I probably came across Regal Robot from the “www.thisiswhyimbroke.com” website. It was just a typical time-killing exercise, but I kept going back to the site and staring at the pictures and sending them to my friends.

The Han Solo in Carbonite desk is probably one of the best-known pieces made by Regal Robot. What sparked your interest for this specific piece of furniture?

I was born in 1973 so I was really too young to appreciate Episode IV when it first came out. The Empire Strikes Back was the first movie I saw. I remember going to Kmart and walking up and down the toy aisle in awe of all the ships and action figures. Back then all I knew was that I wanted the Millennium Falcon and an X-wing fighter. Since those days I have amassed a collection of the original Kenner toys, and last year I finally moved into a space befitting a piece the size of frozen Han.

Han getting encased in carbonite is such an iconic moment in the Star Wars saga. What about this character resonates with you as a fan?

It was only later after seeing the movies more than twenty times that I came to appreciate what Han Solo in carbonite meant. It was really the pivot point of despair in the movies. When Han was frozen and Boba Fett marched it off to Slave I, it felt like all hope was lost. But in the classic “Hero’s Journey” method of storytelling, this was only the beginning and we would find a living Han again in [Return of the Jedi]. So to sum it all up, the piece straddles the worlds of the living and the dead.

Your Han in Carbonite desk is a little different from the ones previously made by Regal Robot. What special requests did you make for this commission?

There were a couple different designs that I had seen on the website and I wasn’t as keen on the wooden desk. It was just the top part of the carbonite without all of the controls and didn’t look as real. Tom was great to work with and I told him how much I liked the lighting of the original prototype. He was able to use the LIFX rope lighting that can change colors and be animated from my phone. That blended well with the LIFX in the rest of our home so now Han’s “mood” can change with mine!

Another great part of the design were the “greeblies” that were built to control Han’s life functions. Tom’s team were able to find casts of dashboard parts from vintage cars at a junkyard to make these and they really look so much like the design in the movie that it’s impossible to tell them apart. Having a “hidden” desk drawer behind a greeblie and power outlets with USB plugs really added an attention to detail that was a nice surprise when the piece got delivered. 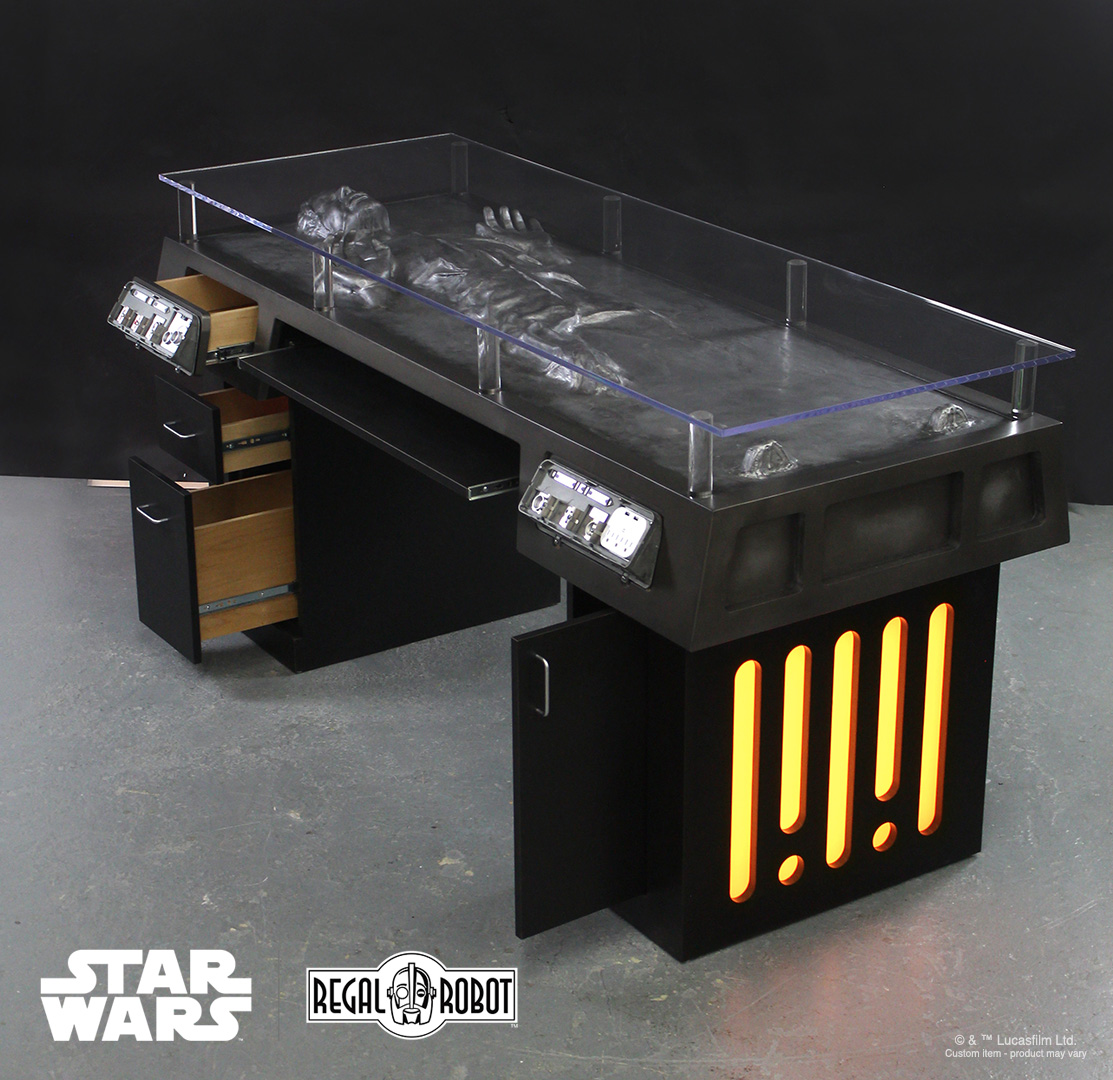 It’s no secret that (Regal Robot founder) Tom and his crew are huge Star Wars fans. Can you tell me a little more about the collaboration process with Tom and how he made your special requests a reality?

Wow, I was a little star struck at first when I got on the phone with Tom. His reputation precedes him and seeing all the creations he has made was a little intimidating! He started geeking out immediately and we had a bunch of different ideas going on what projects we should pursue. I had already purchased Emperor Palpatine’s throne chair from Regal Robot so I knew the quality of what I would be getting.

Then over the course of the project, we iterated by phone and email and Tom’s attention to detail was over the top, such as which direction Han’s head should face to optimize viewing, and how high to make the keyboard tray to be most comfortable. Bear in mind that I’m using Han as my actual desk so the ergonomics had to work! 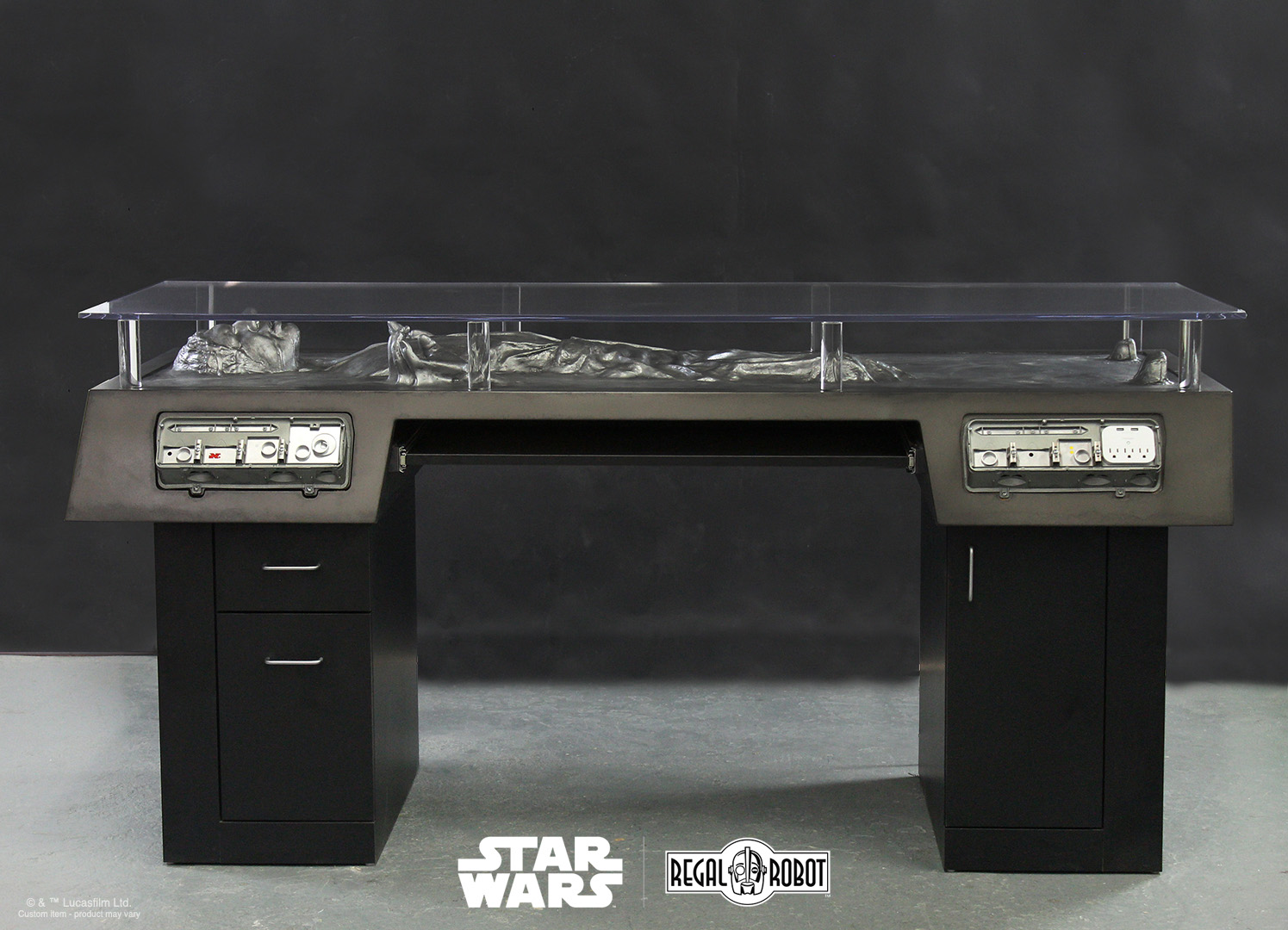 There are several great details on your new desk including numerous light-up features and a USB station. What details do you enjoy most about the desk?

I enjoy waking up in the morning, grabbing a cup of coffee, and turning on Han’s life support system via the little chrome knob. I enjoy changing the colored LIFX lights and now have them programmed into my home automation system and Alexa. So I can tell Alexa to “Turn to the Dark Side!” and the desk turns red!

What was your first reaction to seeing photos of the completed desk?

I was really overwhelmed. My wife and I got married on August 31 and the desk was delivered the day before! It was SOOOOO important for me to have my guests witness this piece of art in person that I was pretty stressed out about getting it on time. When it showed up, I was supposed to be focused on rehearsal dinner and greeting our family but ALL I COULD FOCUS ON WAS ASSEMBLING HAN!

You have quite the impressive Star Wars collection in your office. How does this new desk complete your fan space?

Thank you! I would hesitate to say “complete”, but this certainly has added a critical focal point for my collection. I have been a bit of a rebel for my entire life (search for “Philip Alfano” on google and you can find my high school mullet picture) and so Han’s rebel spirit really touches me in fundamental ways. I see my collection and the whole Star Wars story as a battle between the good and evil inside each of us and the fragility of life. Han Solo in Carbonite puts an exclamation point on all of those feeling for me. 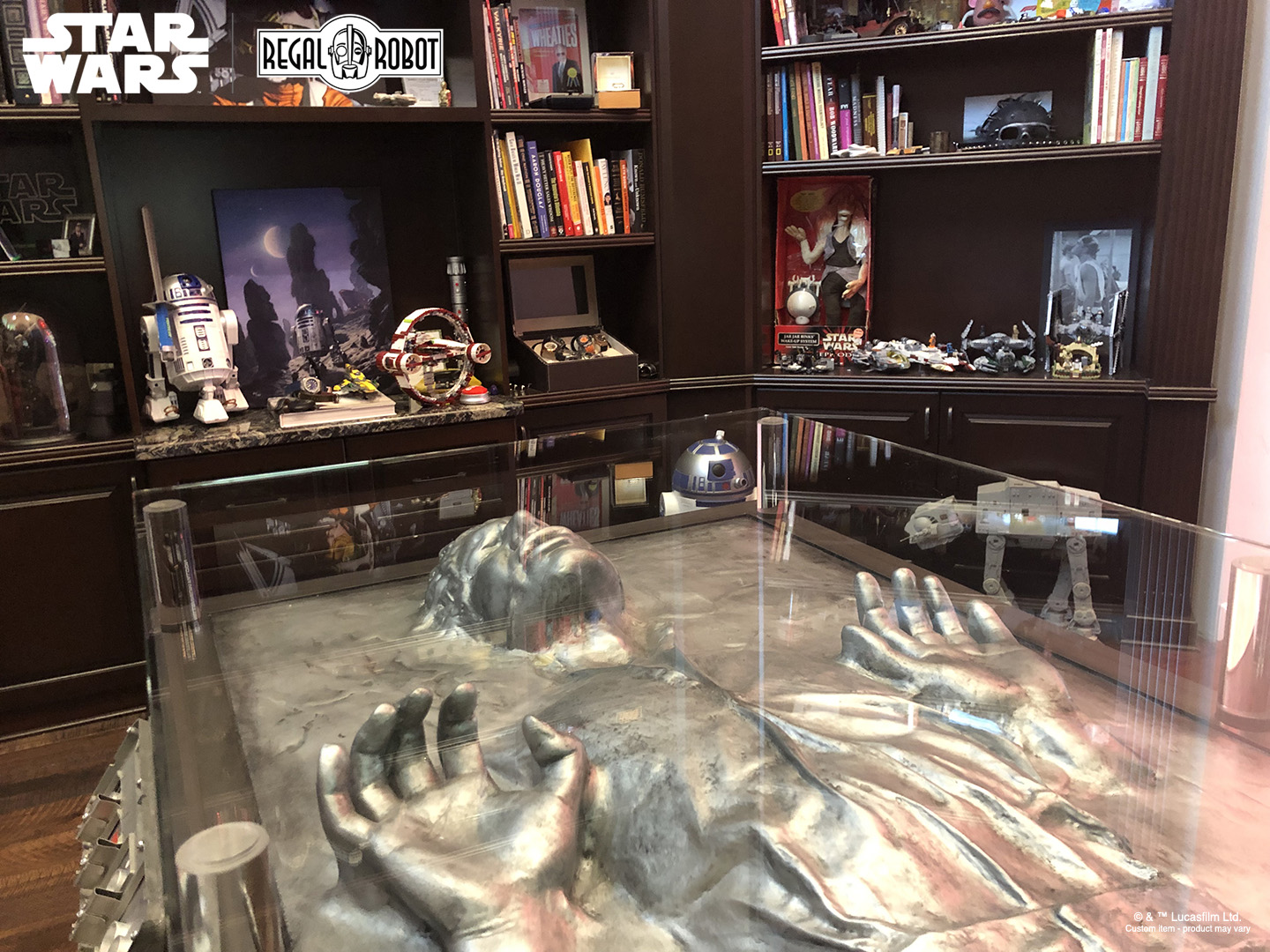 We heard that you are newlywed. First off, congrats! What does your spouse think of this new piece in your home? Are they a Star Wars fan too?

My wife had not seen any of the movies when we got together. Getting this awesome fan room together was more of a negotiation where she got her own space to decorate however she wanted, and I was allowed to geek out with my Star Wars library. Frankly, she didn’t know what she was getting into and has been shocked at all the reactions from people as they walk in our home and see Han’s flashing life support system. She had no idea how many fans were out there.

What sort of reactions do you get when people see your new Han in Carbonite desk?

People have been super excited to see the piece and have taken many selfies with Han. Many folks have asked if it was an actual prop from the movie and what is its “provenance” in terms of being real. The fact that it is endorsed by Disney and Lucasfilm makes it all the more special. Really, the two words that people seem to say over and over again are the following:

After working with Regal Robot, do you think you’d collaborate with them again? What ideas do you have up your sleeve?

Well, Tom has a vivid imagination and I can’t wait to add to the collection. We live in the hills above Boise and when we toured the house and were greeted by animal heads (elk, deer, antelope) over the library. Tom suggested that a Tauntaun bust would look great in that overhead space, and maybe a three-dimensional Wampa bursting through the wall would be really cool. I would also love a life-sized Boba Fett to guard Han and perhaps a Chewbacca to keep Han company.

Finally, I was working a bit with Tom on a three-dimensional mural of the Millennium Falcon coming out of hyperspace over the library to really show motion.

All of these ideas are of course predicated on having a “budget” for such things…maybe Tom will let me sweep floors or wash dishes? He does mention a payment plan on the website but I’m not sure he takes “Imperial Credit”?

— Thanks so much for sharing your story with us Phil!

Love what you see? On our Star Wars Custom Furniture Studio page, you’ll find our currently available premium special editions, past custom creations we’ve made for private clients and even some concept art as inspiration to start the design process for your project!

You can use the form below to request your own custom Star Wars creation!

Lucasfilm and Regal Robot have teamed up to offer custom, special order and even one-of-a-kind official Star Wars furniture, art & decor. We can work with you to bring to life creations you’ve always dreamed of for your home, fan cave, or workspace, or create unique versions of our products, better suited to your needs, style or space.

Due to the time involved in making custom creations, we can only take a limited number of these projects each year.  Submit your custom request by filling out the form below to begin the conversation and learn what we can make for you!

your custom request by filling out the form below to begin the conversation and learn what we can make for you!